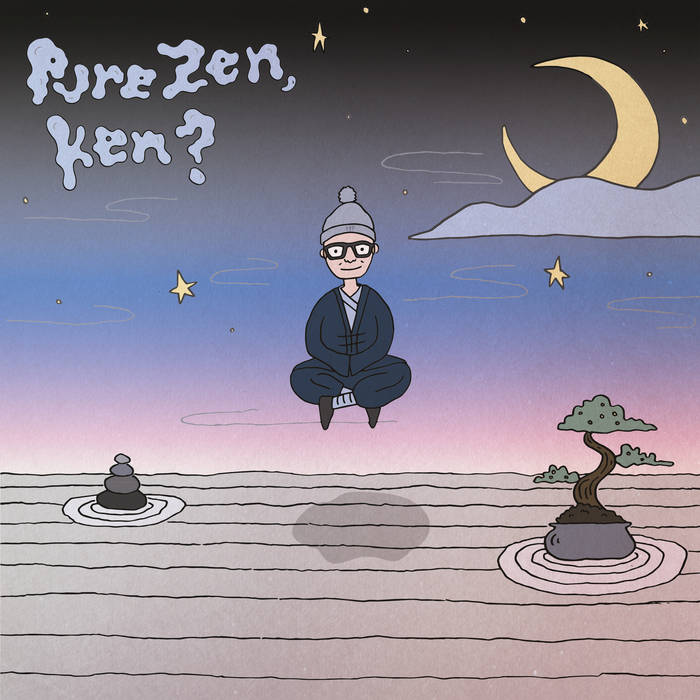 Yip Man of Scotland aka singer-songwriter Al Nero – a Scot living in China - returns with another pulsating grab-bag of razor-sharp riffs, edge-of-the-seat angles, deeply satisfying choruses and endless melodic and harmonic invention. Advice, wisdom & acute observation is what’s on offer here on the excellently named, Pure Zen, Ken? - the follow up to the 2016 debut, Braw Power.

Kicking off with the mockingly titled, ‘Suffer More’ a song with more life-affirming hooks in its minute-long intro than most would consider sufficient for an entire album, yet Nero tells us “everything I write’s a joke” and feels his craft comprises nothing more than “just three chords and a melody”. It’s classic Yip Man, riffs everywhere; bright, shiny horns; gleeful bittersweet chorus - answering the old Huxley question (as to whether a happy artist can truly create anything of merit or worth) in deed rather than in thought. As a statement of intent, it provides a satirical cling film that seems to wrap the rest of the album tightly and with a sly coherence. The useful thing about cling film though, is that it is transparent. The sideways and critical glance of the album’s opening track never obscures or smothers that following music. That music is a smart, often fierce and highly angular set of pop songs. There is something of David Byrne here for sure, but with a more contemporary mathsy preoccupation.

‘A Lesson Learned’ is a clear example of the clever architecture in the song-writing. Proudly gnarled, at once unstable and completely singable, it creates a vibrant and fizzing energy. There’s a hard-won maturity in Nero’s vocal delivery too, a keening and straining power-rock rasp none more brilliant than on ‘Tremors’, an ode to restless leg syndrome and the St. Vitus Dance.

If opening song ‘Suffer More’ explored the act of suffering for one’s art, ‘Here Comes The Feelings’ is Yip Man answering his own questions through the unencumbered three-chord joy of punk rock, channeling the fuzzy majesty of a turn-of-the-century Sympathy For The Record Industry 7”.

By contrast, the atmosphere conjured up by title-track ‘Pure Zen, Ken?’ is new ground for Nero, seemingly borne of the hitherto unexplored musical triangulation of France Gall singing ‘Rolling Hills O’ The Borders’ in the Qinghui Gardens of the Guangdong Province. A satisfying excursion toward new pastures, pregnant with promise, bathed in pathos.

Pathos, empathy and tragicomedy is embedded in this record. It’s there in the nagging self-doubt of ‘Trying Not To Get Caught Out’ a song that sounds not unlike Elliot Smith if he scored a Sondheim musical. It’s there in the exquisitely arranged, ‘Weighing a Pig’, a freewheeling glide through the same hazy semi-acoustic skies as Television’s half-forgotten Adventure album. It’s there on the wonderfully poignant, ‘Aye Peckin’’ where the harmonies are pure Dundee Soul City, the gleeful drive-time guitar solo giving way to an impassioned plea for tranquility - before beautifully employing a particular insult that many outside Scotland only heard for the first time when Billy Connolly mercilessly dealt it to a heckler on his 1974 live album ‘Get Right Intae Him’. It’s even there on the Ween-like, seconds-long sliver of neurological fun that is ‘Disco Ball’. This is the currency of Yip Man.

‘Better Man’ again sees Yip Man vulnerable and regretful as he contemplates past misdemeanors and opportunities passed up. It’s an entirely solo acoustic performance, of a song written alone in Foshan, China, miles from Scotland, miles from home. You can hear again that depth of expression in the vocal delivery and it strikes right at the heart.

The album reaches its climax with the close-harmony courting of ‘My Lucky Stars’, which yearns like Sinatra’s ‘Rain In My Heart’ if he’d used The Breeders instead of Don Costa. Like huge swathes of this record, smoldering somewhere near its core is a perfectly measured contemporary new-wave classicism, rarely found among the dying embers of this decade before we enter the Twenties. Pure zen? You can rest assured.

Yip Man is the alter-ego of Scottish songwriter Al Nero, who gets by with a little help from his friends.

Bandcamp Daily  your guide to the world of Bandcamp

New sounds from Mavi, Ivy Sole & Moderator, plus AJ, the One joins the show, for her latest release